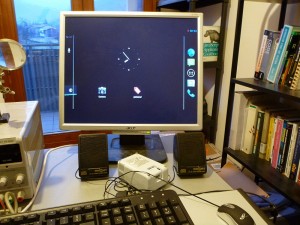 This is the first article about porting Android 4.0.x AKA Ice Cream Sandwich AKA ICS on the OpenRD Client. This is a pretty powerful ARM machine (1.2 Ghz  256 KB L2 cache, 512 MB RAM and Gigabit Ethernet) with a PCIe Xgi graphics chip. The goal is having a good hacking machine, so the system will be brought up via NFS root (perhaps in a future part everything will be put on the internal NAND or a SD card, it should not be difficult).

The standard U-boot provided with the OpenRD is used to boot the system. The environment of the boot-loader has to be set-up to start mainline kernel, as outlined on the Debian on the OpenRD page. The Android kernel and users-pace will be loaded via the network (the IP and paths refer to my development environment):

After some research for a Linux kernel with appropriate Androidism I choose to start with the kernel published by Freescale on their Open Source git repository. I had good results with their kernel on i.MX28 and i.MX53 based machines. The patch for the OpenRD are based on the imx_2.6.38_android branch, tag imx-android-r12. ICS is based on Linux 3.0 kernel but I haven't seen big problems using this version (just some warning about missing some IP connection tracking statistics in the sysfs file-system). You can download my latest patch for supporting the OpenRD board and the .config file I used. This patch:

By the way, the tool-chain used to compile the kernel is the standard Codesourcery one. 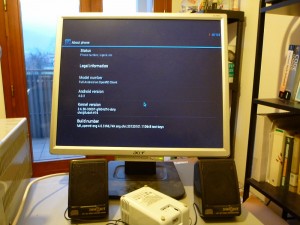 It's quite an adventure to build Android ASOP from sources. I strongly encourage you, if you are, like me, new to the Android planet, to read the wonderful book Embedded Android by Karim Yaghmour. I bought it as a pre-release but I'm sure the the four initial chapters alone saved me lot of hours browsing the Internet. I started from the 4.0.3 tag in the ASOP repo. The first step is to setup the build environment. The build dependencies are rather complicated. Following the book mentioned above this is what was needed on Debian Squeeze:

Much more complicated is to get rid of the OpenJDK/gcj Java tools incompatible with Android. I didn't want to remove them because a whole lot of other packages depends on them. After installing latest Sun Java 6 SKD in /opt/java/ I sanitized the shell environment:

The next step is writing a configuration file for the board (under device/evol/openrd for example). Much of this is quite standard as outlined in Karim's book, the important difference is BoardConfig.mk:

Here is a list of various modifications to the AOSP needed to build and run the whole thing:

The build commands are standard: 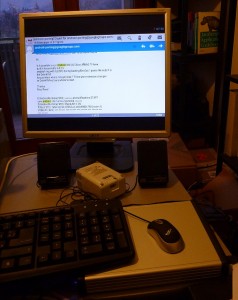 Android works quite well on the OpenRD via NFS (you have to wait a bit on the first boot while the dalvik cache is created via the network and don't expect super-smooth graphics from the frame buffer without acceleration). You can read email, browse the web and use quite a lot of apps. Here is what does the serial terminal show. You can connect to the machine also with adb connect [machine ip] and adb shell.

If you want to try the thing out on the OpenRD you can download the root file system from here. The kernel is in the /boot directory. Just export the file-system via NFS, the kernel uImage via TFTP and with the U-boot commands listed above you're done.

There are still some problems that will be solved (hopefully) in follow-ups to this article.

One Response to Android on OpenRD, part 1